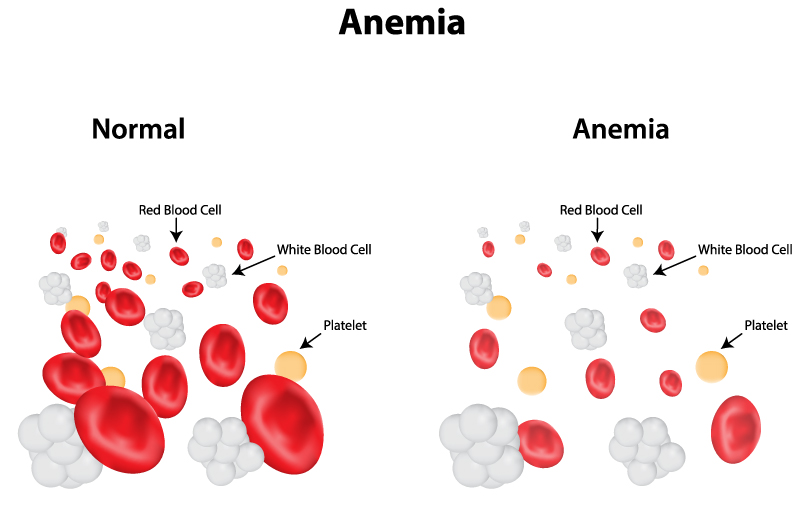 Anemia is defined as a decreased number of red blood cells (or RBCs) as measured by one of the following blood tests:

What is iron deficiency and anemia?

There are many types of anemia. Iron deficiency anemia is a specific type of anemia that occurs when there is not enough iron to make the hemoglobin found in red blood cells. 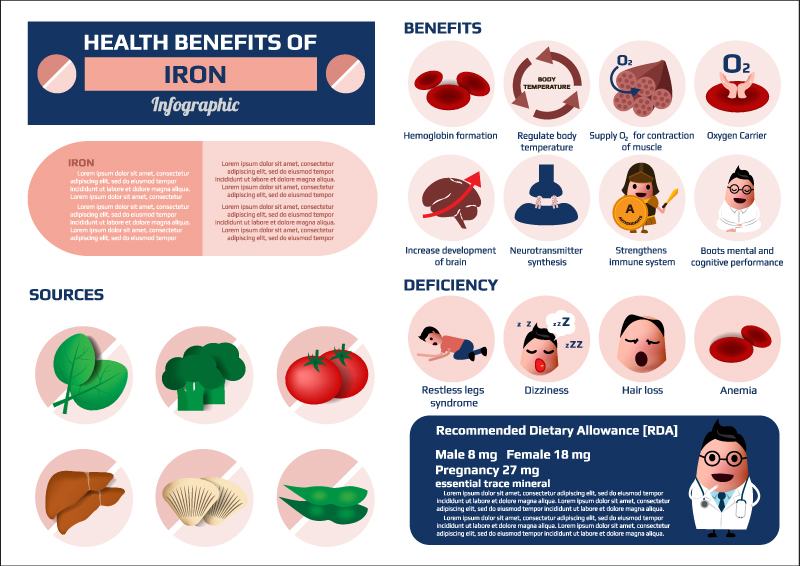 Iron deficiency anemia occurs when there is not enough iron in the body to make hemoglobin.

The source of blood loss may be obvious, such as in women who have heavy menstrual bleeding or who have had multiple recent pregnancies or deliveries, or in a person with a known bleeding ulcer or mass.

In other cases, the source of the blood loss may not be so obvious, as in someone who has chronic bleeding from their GI tract. This may appear as diarrhea with black, tarry stools, or, if the blood loss is very slow, the stool may appear normal.

Donating blood can also cause iron deficiency, especially if it is done on a regular basis.

2. Decreased absorption of iron from the diet

Normally, the body absorbs iron from our food through the GI tract. If the GI tract is not functioning properly this can lead to iron deficiency and anemia. Conditions that can cause decreased iron absorption include:

A common cause of iron deficiency anemia in developing countries is a lack of foods that contain iron. This is rarely seen in adults in developed countries because many foods contain iron, and others are fortified with iron.

Pregnant and postpartum women may develop iron deficiency anemia because of the increased iron requirements of the growing fetus and placenta, and blood loss at delivery.

Iron deficiency anemia can be a symptom of certain types of cancer like colorectal cancer so ALL anemia should be evaluated promptly and aggressively by a trained medical professional like Dr. Sinha.

How common is iron deficiency anemia?

Iron deficiency anemia common in the United States, especially in women who are still menstruating or who are pregnant.  It occurs in roughly 2-10% of the population. It is less common in men.

It can be a sign of underlying GI disease such as colorectal cancer so any iron deficiency anemia, especially in a man or in a woman who is not menstruating or pregnant, needs to be evaluated promptly and aggressively to avoid delayed diagnosis and delayed care.

Who is at risk for developing iron deficiency anemia?

What are the symptoms of iron deficiency anemia? 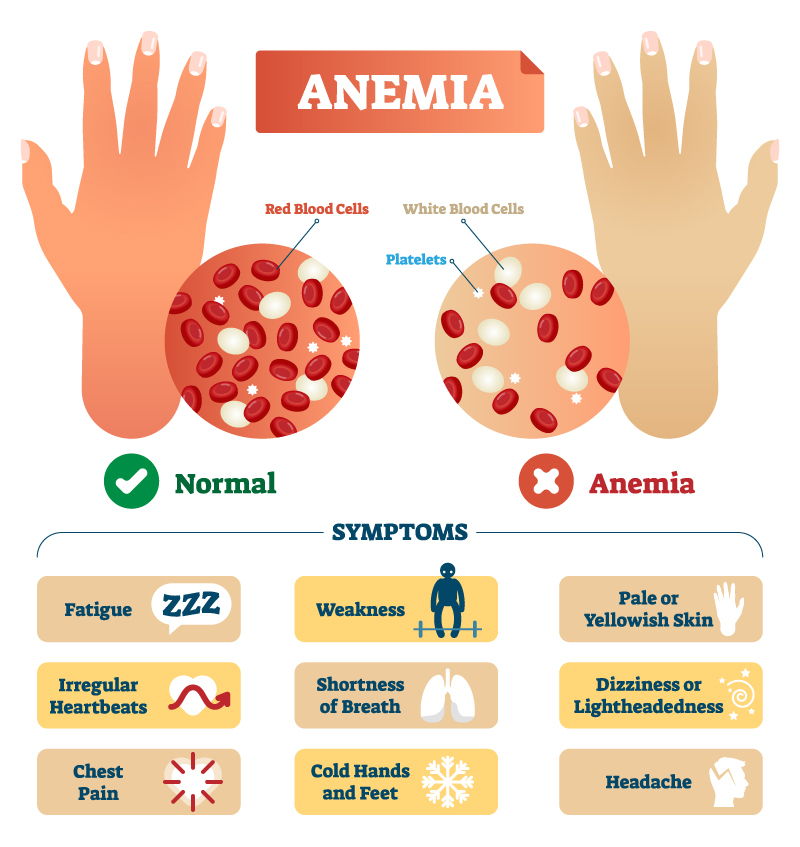 How is iron deficiency anemia diagnosed? 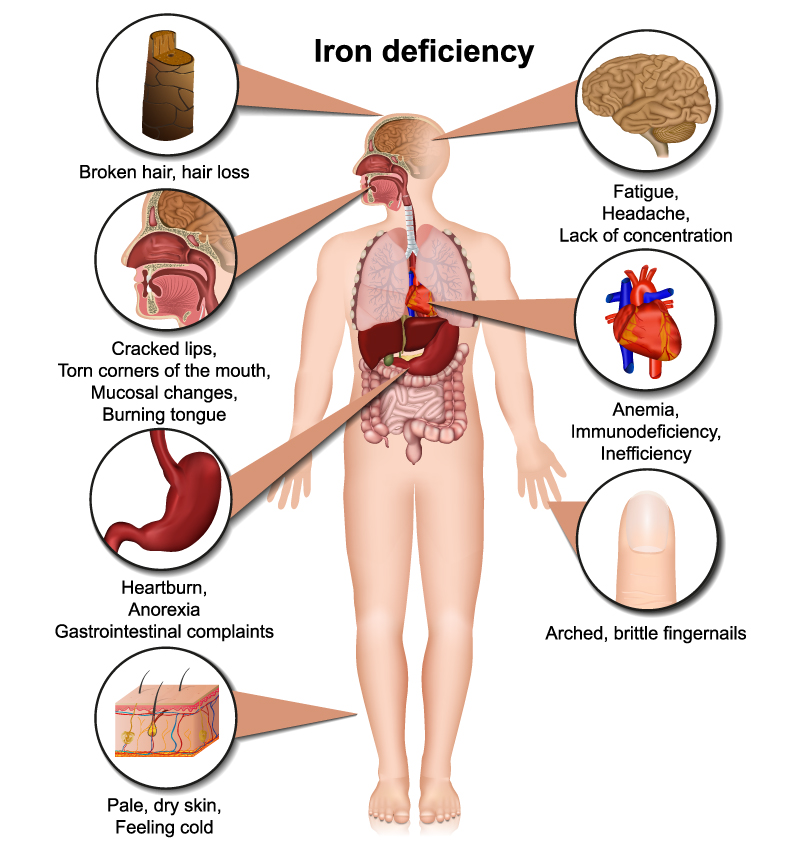 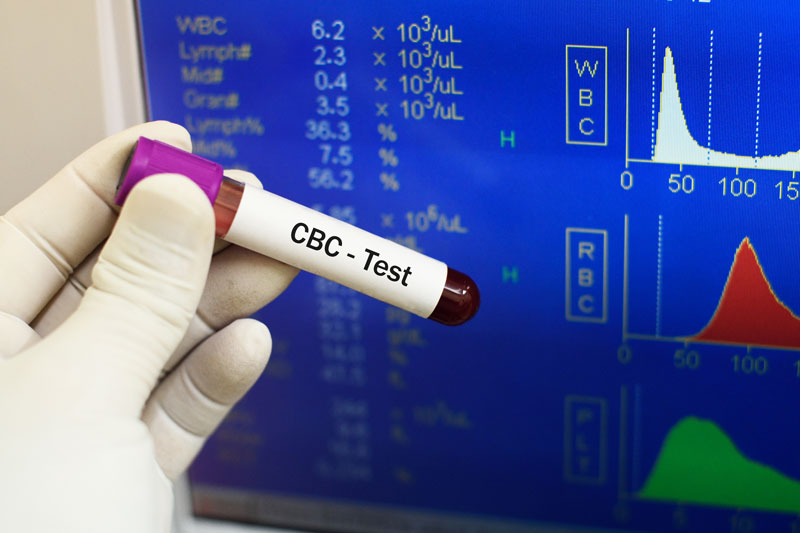 How is iron deficiency anemia worked up? What other tests might I expect?

Once a diagnosis is made, our team will search for a source of blood and iron loss. It is important to identify the cause of your blood loss. We will take a thorough history and order the appropriate tests to work up your condition.

Additional blood tests for certain conditions that interfere with iron absorption such as autoimmune gastritis, celiac disease, lactose intolerance, and H. pylori infection may be ordered.

Additional diagnostic tests may include a colonoscopy, upper endoscopy, small bowel capsule endoscopy, or CT enterography to look for areas of bleeding in the GI tract.

What is the treatment for iron deficiency anemia?

The first step in treating iron deficiency anemia is to determine the cause of the deficiency and to correct it, so that iron does not continue to be lost, and any serious conditions like colorectal cancer are identified and treated as early as possible.

After that, the treatment for iron deficiency anemia is iron therapy. Iron supplements may be taken by mouth or IV (through a vein).

Oral iron tablets are used in most people with iron deficiency anemia. Intravenous iron can be used for people whose GI tract is unable to adequately absorb iron or in those who are unable to tolerate oral iron.

A blood transfusion may be given if a person is actively bleeding and/or the hemoglobin or hematocrit is so low that an individual is not hemodynamically stable.

Oral iron tablets are usually a safe, inexpensive, and effective treatment for people with iron deficiency. A few tips for those prescribed iron therapy include:

What are the side effects of iron therapy? 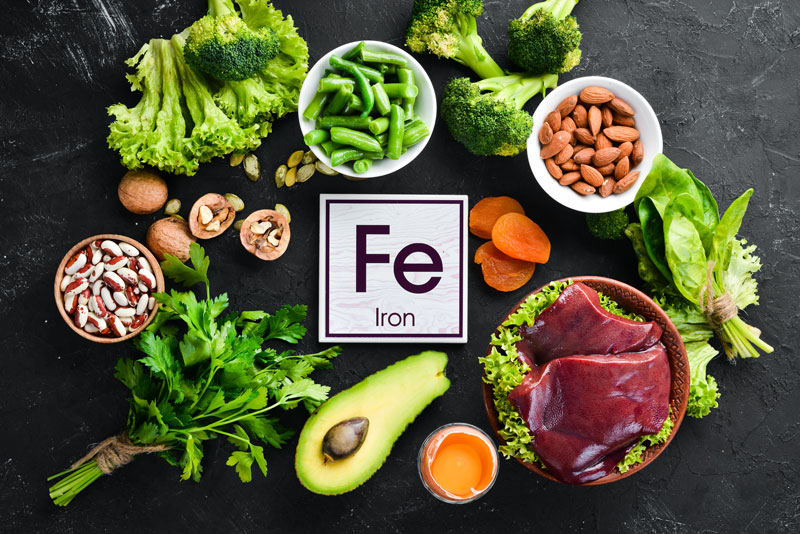 Can I correct my iron deficiency anemia simply by increasing the iron in my diet? Do I have to take iron pills?

Good dietary sources of iron are found in meat, grains, fruits, and vegetables. Plant sources of iron include whole or enriched breads or grains, iron-fortified cereals, legumes, green leafy vegetables, and dried fruits. Iron-rich foods should not be consumed with coffee or tea, and taking vitamin C or drinking orange juice with iron rich foods can help with absorption.

How can I prevent iron deficiency anemia?

People who have had iron deficiency anemia once may be at increased risk for developing it again, depending upon why they developed the condition initially. Maintain a balanced diet. Watch for symptoms of GI blood loss. If you have heavy periods, discuss treatment options with your primary care provider or gynecologist.

Iron supplements and multivitamins that contain iron should NOT be taken unless prescribed. Most men and postmenopausal women do NOT need supplemental iron unless they have an underlying illness that reduces iron absorption or causes bleeding.

What about other types of anemia? What causes them? 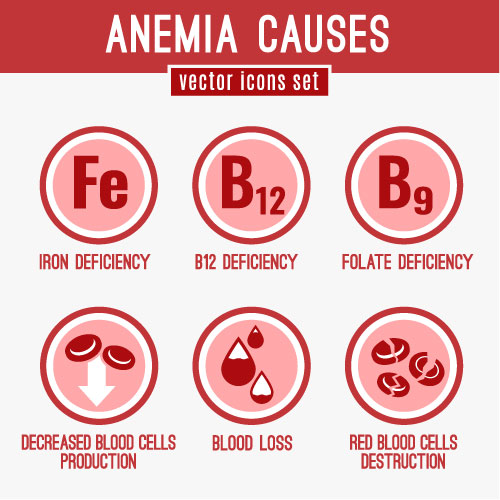 DISCLAIMER: PLEASE READ CAREFULLY
The information on this website is to provide general guidance. In no way does any of the information provided reflect definitive medical advice and self diagnoses should not be made based on information obtained online. It is important to consult a best in class gastroenterologist regarding ANY and ALL symptoms or signs as it may a sign of a serious illness or condition. A thorough consultation and examination should ALWAYS be performed for an accurate diagnosis and treatment plan. Be sure to call a physician or call our office today and schedule a consultation.

Find us on the map